sorry ma forgot to take out the faders... 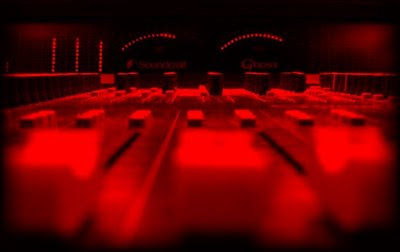 Been so busy with distractions (like bread and butter) that I've kind of had to leave the mixing board for a while. Can't wait to get back to it.

Right now I've got six tunes halfway in the can and a few more to put down tracks on. A cinematographer pal of mine wanted to do a little docudrama on this project so he came over last week, set up lights and filmed a bunch of boring stuff of me talking, recording guitars, etc. I'm sure some iteration of that will be posted in the future...just wanted to warn you.
Posted by Greg Pope at 4:21 PM No comments:

I'm two days into this new project. I've tracked drums for 6 tunes, and added a few guitars here and there. Tonight: Vocals.

Here's a 40 sec vid of some of my progress...trying to record AND film myself has been a bit overwhelming so I had to kind of stop that for now. More episodes to come.

Pictured here is a photographic representation of an actual professional recording session. This graphic looks nothing like my home studio, and the gentlemen pictured here will unfortunately not be involved with my recordings in any way, but perhaps I'll post of photo of my "studio" in a later episode, after I pick up all my kids' toys.

Yes, barring flood, famine, or pestilence, the recording shall commence on Monday. For me it's an unpredictable and kind of all consuming task, but I hope to make a few interesting posts out of it. I'm not sure when or what I'll actually post. But dang it I'll post something.

As far as the songs go, I have a few things that keep returning to my mind, and that's usually when I start making plans to record something. There is always the possibility that I'll spend all this time getting my ideas down on tape only to later deem them "nothing" or "just a bunch of crap" but I really hope that doesn't happen, because like you, I don't have much time to waste these days.

As far as when it will be finished, or a release date, I just don't know right now. Hope I'll have a better idea about that after next week.

At this point I'm doing mundane things like going to the music store to buy a new snare head, or changing guitar strings, or reading about pre-amp settings. But in just a few days I hope to be doing something moderately interesting.

So hope you'll tune in to this blog over the next few weeks for more electrifying episodes of Greg Pope is Making Another Record.
Posted by Greg Pope at 12:12 PM No comments: